Andy is going to work with Mara to add unit tests to the automated build that Mara created with Microsoft Azure Cloud Pipelines. Regression bugs are creeping into their code and breaking the leaderboard’s filtering functionality. Specifically, the wrong game mode keeps appearing.

The following image illustrates Amita’s problem. When Amita selects “Milky Way” to show only scores from that game map, she gets results from other game maps, such as Andromeda. 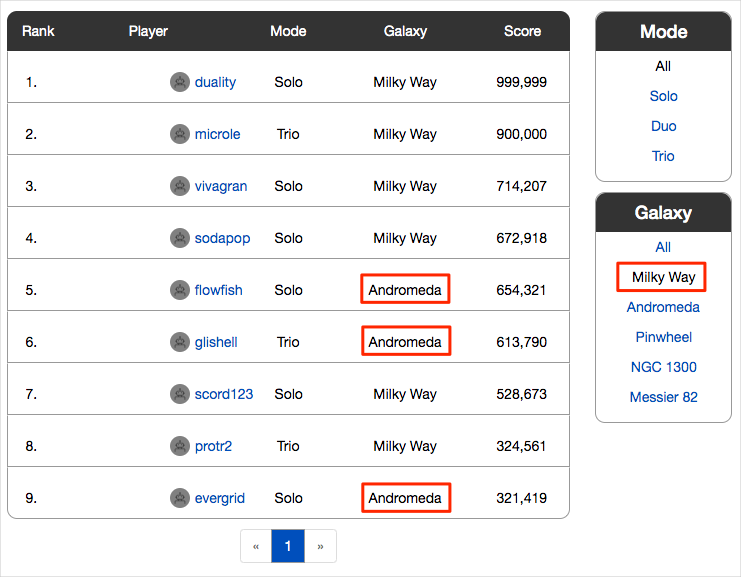 Both Andy and Mara want to catch the error before it reaches Amita, the tester. Unit tests are a great way to automatically test for regression bugs.

Andy also thinks that adding the unit tests now will give them a head start as they improve the Space Game web app. The application uses a document database to store high scores and player profiles. Right now, it uses local test data. Later, they plan to connect the app to a live database.

A number of unit test frameworks are available for C# applications. Mara chooses NUnit because it’s popular with the community and she’s used it before.

Here’s the unit test you’re working with, along with Mara and Andy.

You can filter the leaderboard by any combination of game type and game map.

This test queries the leaderboard for high scores and verifies that each result matches the provided game map.

In an NUnit test method, TestCase, provides inline data to use to test that method. Here, NUnit calls the FetchOnlyRequestedGameRegion unit test method like this:

Notice the call to the Assert.That method at the end of the test. An assertion is a condition or statement that you declare to be true. If the condition turns out to be false, that could indicate a bug in your code. NUnit runs each test method using the inline data you specify and records the result as a passing or failing test.

Many unit test frameworks provide verification methods that resemble natural language. These methods help make tests easy to read and help you map the tests to the application’s requirements.

Consider the assertion made in this example:

Assert that the game region of each returned score matches the provided game region.

Fetch the branch from GitHub

Here you fetch the unit-tests branch from GitHub and check out, or switch to, that branch.

This branch contains the Space Game project that you worked with in the previous modules and an Azure Pipelines configuration to start with.

It’s a good idea to run all tests locally before you submit any tests to the pipeline. Here you do that.

You see that all five tests pass.

In this example, the tests took about one second to run.

Notice that there were five total tests. Although we define just one test method, FetchOnlyRequestedGameRegion, that test is run five times, once for each game map as specified in the TestCase inline data.

4. Run the tests a second time. This time, provide the –logger option to write the results to a log file.

You see from the output that a TRX file is created in the TestResults directory.

A TRX file is an XML document that contains the results of a test run. It’s a popular format for NUnit tests because Visual Studio and other tools can help you visualize the results.

Later, you’ll see how Azure Pipelines can help you visualize and track your tests’ results as they run through the pipeline.

5. As an optional step, in Visual Studio Code, open the DocumentDBRepository_GetItemsAsyncShould.cs file from the Tailspin.SpaceGame.Web.Tests folder, web hosting reddit and examine the test code. Even if you’re not interested in building .NET Core apps specifically, you might find the test code useful because it resembles code you might see in other unit test frameworks.

Push the branch to GitHub

Here you push your changes to GitHub and see the pipeline run. Recall that you’re currently on the unit-tests branch.

Here you see the tests run in the pipeline and then visualize the results from Microsoft Azure Test Plans. Azure Test Plans provides all the tools you need to successfully test your applications. You can create and run manual test plans, generate automated tests, and collect feedback from stakeholders.

Although Mara and Andy have added only one test, it’s a good start and it fixes the immediate problem. Now, the team has a place to add more tests and run them as they improve their process.

Merge your branch into master

Mara and Andy are happy with their results, so they decide to merge the unit-tests branch to master. In practice, you would do the same. But for brevity, we’ll skip that process for now.