Development teams around the world share one consistent goal: to release software. Whether it’s a major platform with annual releases or a web site that publishes multiple times per day, every workflow drives toward the same result.

Suppose you lead a team of software/web developers working on the next version of your product. As your team scales up, the challenges of keeping everything running smoothly become more and more difficult. Everything needs to focus on the upcoming release, and you need a workflow that fits the unpredictable nature of engineering. That workflow needs to provide a set of practical processes for managing work, code, and deliverables. The good news is that you’re already using GitHub, so there’s a light at the end of the tunnel.

In this post, you learn how to implement a release based workflow on GitHub using project boards, branches, and releases.

Here, we discuss how you can create a release based workflow using GitHub.

What is a release based workflow?

A release based workflow is a set of patterns and policies that focus on releasing software. While this notion may seem like an obvious goal for a development team, the value of this perspective is somewhat nuanced. This unit will discuss how it drives three different parts of the release cycle: managing the project, selecting a branching strategy, and releasing to customers.

From a planning mindset, being release-centric means that issues are divided up into distinct iterations that produce a new version. These iterations are often called sprints and are time-boxed in roughly equal periods to produce incremental changes. Other teams prefer to package entire release versions into a single iteration that can last a few months or longer. In GitHub, these iterations are managed as projects.

The dominant feature of a project is its board. The board is the central plan of record for the iteration and contains all of the cards that are to be resolved. A card can represent an issue, a pull request, or even just a generic note.

By default, each card starts in the To do column and moves to In progress after work begins before ending in Done. You may customize these columns, add additional columns, or apply automation to the movement of these cards and their properties to fit your team’s process.

The card’s project status is integrated across the repository. For example, dragging a card from To do to In progress changes its status, as well as updates the visual indicator next to the project’s title. The green section indicates the portion of cards marked as Done, whereas purple is used for cards In progress. The remaining space represents the quantity of cards that have yet to begin. In addition to dragging cards around the board, you may update them from their main view. 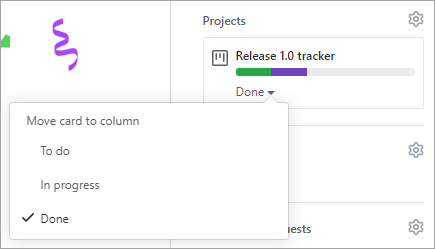 By using a project board, all stakeholders have an easy way to understand the status and velocity of a project. You can also create boards that are scoped to individual users or a collection of repositories owned by an organization.

Learn more about tracking the progress of your work with project boards .

Milestones are similar to project tracking in that there is an emphasis on the prioritized completion of issues and pull requests. However, where a project may be focused on the team’s process, a milestone is focused on the product.

Learn more about tracking the progress of your work with milestones .

Repositories that have multiple developers working in parallel need a well-defined branching strategy. Settling on a unified approach early in the project will save confusion and frustration as the team and codebase scale.

Learn about how we use Git at Microsoft .

In addition to providing a platform for collaborative software development, GitHub also offers a prescribed workflow designed to optimize use of its various features. While GitHub can work with virtually any software development process, it’s recommended that you consider the GitHub flow if your team has not yet settled on a process.

A long-lived branch is a Git branch that is never deleted. Some teams prefer to avoid them altogether in favor of short-lived feature and bug fix branches. For those teams, the goal of any effort is to produce a pull request that merges their work back into master. This approach can be effective for projects that never have the need to look back, such as first-party web applications that will never support a previous version.

However, there are certain scenarios where a long-lived branch serves the best interests of a team. The most common case for a long-lived branch is when a product has multiple versions that must be supported for an extended period of time. When a team needs to plan for this commitment, the repository should follow a standard convention, such as release-v1.0, release-v2.0, and so on. Those branches should also be marked as protected in GitHub so that write access is controlled and they cannot be accidentally deleted.

Teams should still maintain master as the root branch and merge their release branch changes upstream as long as they fit into the future of the project. When the time comes, release-v3.0 should base off of master so that servicing work for release-v2.0 doesn’t complicate the repository.

Suppose a bug fix were merged into the release-v2.0 branch, and then merged again upstream into master. It was then later discovered that this bug also existed in the release-v1.0 branch and needed to be backported for customers still using that version. What’s the best way to do this?

Merging master down into release-v1.0 would not be a feasible option since it would contain a significant number of commits that were not intended to be part of that version. For the same reason, rebasing release-v1.0 onto the current master commit would not be an option.

An alternative option would be to manually reimplement the fix on the release-v1.0 branch, but that approach would require much rework and not scale well across multiple versions. However, Git does offer an automated solution to this problem in the form of its cherry-pick command.

What is Git’s cherry-pick command?

git cherry-pick is a command that enables you to apply specific commits from one branch to another. It simply iterates the selected commits and applies them to the target branch as new commits. If necessary, developers can merge any conflicts before completing the backport.

When a product version is ready to be released, GitHub simplifies the process of packaging it up and notifying consumers.

Creating a version is as straightforward as filling out the form: